Dr Tsegaye Degineh has received the highest recognition from the Federal Republic of Germany. He was awarded the Federal Cross of Merit with Ribbon by the President of Germany, Mr Frank-Walter Steinmeier for his manifold services to the common good and his very personal intercultural commitment. His entire work for the people in Germany, Ethiopia and Africa is always connected with the goal of "development, peace, fairness, education, teaching of values through sport especially with the international Judo values". 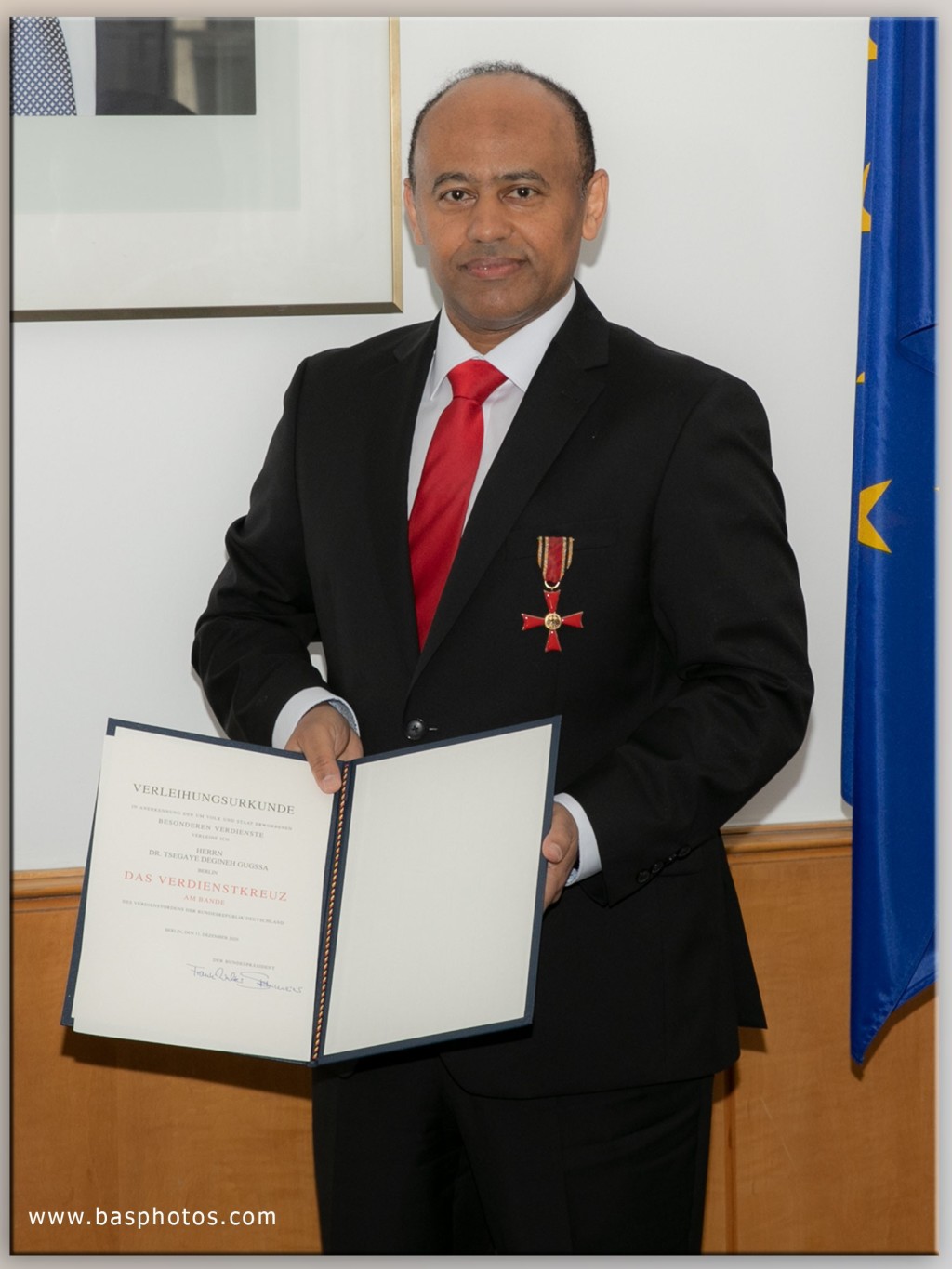 Dr Tsegaye Degineh said , "It is a great honour and pleasure for me to be honoured with the Federal Cross of Merit on Ribbon of the Federal Republic of Germany. I never once thought that I would one day be honoured with Germany's highest award. In my view, volunteering is an indispensable cornerstone of democracy, which enormously strengthens social unity and stands for social peace. All over the world, countless people are committed to the common good, our planet and peace."

Dr Degineh is passionate about voluntary work, i.e. doing something for other people for free since his studying times in Germany and is still highly committed to many people on a voluntary basis.

The doctor of economics has many years of experience in various positions as multi-project manager, project management and enterprise architecture management. He is currently, among other things, Diversity Officer and responsible for HR Communications at Daimler AG, Mercedes-Benz Sales Germany and was portrayed last year as the "Face of Sustainability" of the Group. Dr. Degineh has a great expertise in the areas of: international project experience, intercultural competencies, information technology, human resources and sustainability.

Dr Tsegaye Degineh, who, as an enthusiastic Budo sportsman (Judo and Ju-Jitsu), is convinced of the value framework and the international Judo values. He has made it his business to contribute with his conviction and development expertise. Thus, he has been highly involved internationally in Ethics Committee and in the topic "Sustainability / Sport 4 Climate".

The bearer of the 5th Dan black belt, he is also highly committed in Germany, brought modern Ju-Jutsu to Ethiopia in 2007 and has been working together with Mr Johannes Daxbacher since 2009 to build a national Judo and Ju-Jitsu association in Ethiopia.

Among the achievements of Dr Tsegaye Degineh are:

- Development of a close and very trustful cooperation with the International Judo Federation (IJF) and the African Judo Union (AJU).

- Engagement for the implementation of the "Judo values" like discipline, respect, responsibility for the Ethiopian society.

- Personal support to the Ethiopian athletes and organisation of numerous equipment donations for Ethiopia (in cooperation with the German Foreign Office, the German Olympic Sports Federation, the German Judo Federation and the German Embassy in Addis Ababa).

- Coordination of the deployment of many trainers in Ethiopia and other African countries. 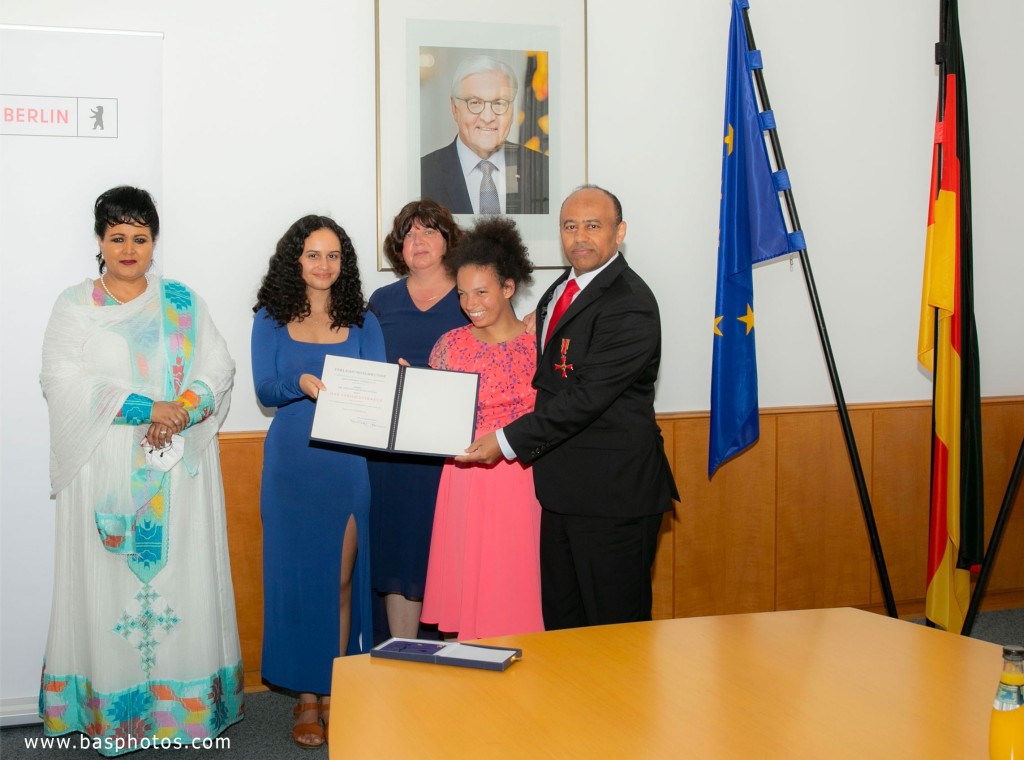 Since 2000, Tsegaye Degineh, who was born in Addis Ababa, supported various humanitarian initiatives in Ethiopia such as financial school fee support for needy children and orphans.

He is highly engaged in the German-Ethiopian and German-African knowledge transfer in various fields, especially for value transfer, German development experiences as well as in project management. Since the beginning of the Corona crisis he regularly informed the Ethiopian government but also the Ethiopian people living in the diaspora about the German Corona fighting strategy and passes on transparent and extremely helpful measures to his compatriots.

For the initiative of a city partnership between Addis Ababa and Berlin, he was entrusted with the successful establishment of contacts between the offices of the two mayors.

For some time now, he has been personally advising the Ethiopian Minister of State for Culture and Sports, in particular with a view to drawing up an implementable sports and education roadmap for the country of some 110 million inhabitants.

Dr Degineh continues to be a member and official in various voluntary associations and is intensively involved in many economic and socio-political events on the topics of "Integration and Africa".

He has written numerous technical papers and is in great demand by German and African media as an interview partner on the topics of "Economy and Politics, Project Management, Integration and Migration, Experiences from Germany and Europe, Ethiopia, Sports and Society, Impact of the COVID-19 Pandemic on Economy and Society".

His book "Project Management for Millennium" published in Amharic (official Ethiopian language), is a standard work in ministries and institutions in Ethiopia and has been recommended by the Institute for International Cooperation of the German Adult Education Association as suitable for adult education through IIZ/DVV. In addition, he has published another book in Amharic "Martial Art Philosophy and Basic Techniques" which is first time in Amharic and unique in Africa.

Dr Tsegaye Degineh is a bridge builder. The award demonstrates that Germany is honouring and supporting all kind of efforts for "peace and development". Congratulations.

31 African Countries at the Tokyo 2020 Games

A New Sports-Study Programme in Morocco